A Festive Adventure
Excitement is mounting as Santa and his elves start preparations to take the train into the world famous Llechwedd Slate Caverns to take up residence in his underground grotto.
Each year Santa’ elves visit North Wales and deck the subterranean world of Llechwedd with glittering lights. On the 30th November Santa’s sleigh will land in Snowdonia before the train takes  him into the heart of the mountain to meet children from all over Britain.
This year the elve’s are planning a special party night in the Caverns Café with on 4th December with magic, kiddies disco and special treats FREE to anyone taking the Santa Train that night.
The Santa Train takes children and adults alike into the magical underground world of Llechwedd where each child meet Santa in his cave and receives a gift. The adults are rewarded with a mince pie and a glass of fruit punch.
As the train travels into the mountain there are festive surprises in the tunnel on what is perhaps the most unusual grotto in Britain.
Santa Trains will run from 10am-4.15pm: Nov 30th, Dec 1st, 7th & 8th, 14th & 15th, 21st & 22nd, 23rd, 24th Special Festive Night for the Kids 4th December from 5.00pm
Book tickets online: 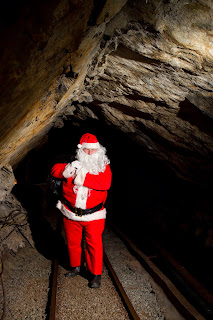 Arts and Crafts at Llechwedd this Summer

This summer  we’ve got a real treat going on for art lovers and kids alike here at Llechwedd. A lovely lady called Carol who makes patchwork and quilts has set up her studio next to the Victorian Sweetshop for the duration of the summer holidays.


Carol – who incidentally is Mum to Cariad who runs our shop – is in her Studio Monday to Friday each week and is happy to chat or work with kids on a little project. Carol came to us because she was inspired by a visit to Llechwedd some months ago. Since then she has been busy creating cushions, ipad covers and even quilts based on her love of the amazing landscape around us.


Come over and have a chat or better still come and have a go … chatting is free and a workshop is only £2.00. 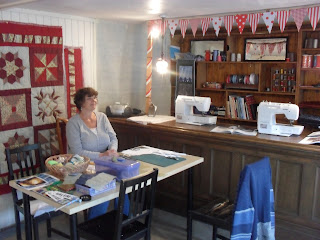 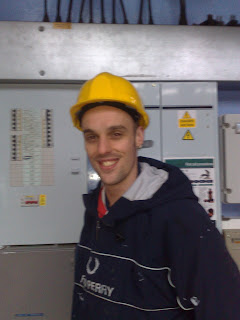 Terry is one of our new guides here at Llechwedd and he's a big hit with our visitors so we thought we'd tell you more about him....

Terry joined us in March this year and he is born and bred in Blaenau Ffestiniog. Terry loves working on the Tramway tour as there is more opportunity for interaction with visitors. Being local many visitors have asked Terry if his family have worked at the mine in days gone by and as a result Terry has started to look into his family history.

Outside of work Terry is a proud dad and looks forward to seeing his daughter Cara when he finishes work. Terry enjoys sport and plays in midfield for the Blaenau Amateurs football team which he currently captains.

Look out for Terry when you visit the caverns!

Posted by Haydn Jenkins at 12:55 No comments:

The Llechwedd Slate Caverns in Blaenau Ffestiniog celebrate their 40th anniversary this year. They are also celebrating a great start to the season with Easter Monday marking the busiest April day since 2006.

The site has received funding from CADW which will enable them to modernise the iconic deep mine and tramway tours over the next two years. This year will also see the launch of Antur Stiniog's downhill mountain bike trails and working with Zip Land the longest series of zip wires in the world will be at Llechwedd in late 2012/early 2013.

This season also sees the launch of new family friendly initiatives including an adventure playground which is being completed this week as well as a craft room where kids can enjoy painting their own slate coaster and a chance to win one of the unique Llechwedd old coins by taking part in a free Mini Miners Trail around the site.

A preview of how the downhill biking trails were looking this February can be found below: 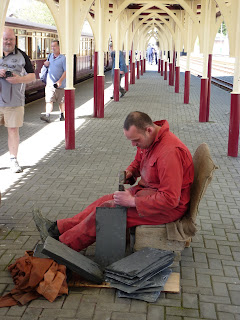 'Early Bird' services will be running on the railway all weekend which will allow ample time for you to hop on a minibus and come and take a tour at Llechwedd Slate Caverns.

As well as special services and the opportunity to see some of Ffestiniog Railway's historic engines there will also be many other events during the weekend including guided walks around the area.

On Saturday and Sunday we will be demonstrating the traditional art of slate splitting on the platform at Blaenau Ffestiniog. Come along and see our slate splitter at work and learn about the Llechwedd mines.

In Blaenau Ffestiniog you can find out more about the town's regeneration plans including a poetry band trail around the town, a velorail on disused rail tracks and the proposed cycle and walking track around Llyn Ystradau at Tanygrisiau.

Ceri Cunnington from Antur Stiniog will be on hand on Sunday and is offering to take a minibus up to show people the downhill cycle trails at Llechwedd which are nearing completion. This exciting development is creating a huge amount of interest in the mountain biking world and is due to open later this year.

Full details of the Blaenau 30 event can be found on Ffestiniog Railway's website http://www.festrail.co.uk/content/publish/specialevents/Blaenau_30.shtml

Posted by Haydn Jenkins at 10:18 No comments: 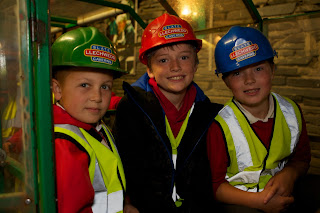 Local environmental artist Stacey Cohen joins Llechwedd Slate Caverns this half term to lead some fun childrens’ activities using slate. Stacey – who has worked everywhere including Australia and Uruguay and is a musician, naturalist and artist – has spent time at Llechwedd over the last couple of weeks and is looking forward to working with children here in Blaenau.
With its operational quarry and world famous tours Llechwedd offers a unique experience for local children to experience a living part of their own heritage.
Acitivies will include:
Stacey will be at the Llechwedd Slate Caverns on Tuesday 25th and Wednesday 26th October between 10.00am and 5.00pm.
The activities are free to anyone who has purchased a ticket for one of the tours or £2.00 on their own to cover the cost of the slate coasters.
Posted by Haydn Jenkins at 09:53 No comments:

Another film that Llechwedd has been used as a set for is Prince Valiant, it was made in 1954. The underground lake at Llechwedd was the section of the caverns that featured in this film. It is a colour film and was made using Cinemascope, which is described in the trailer as a 'modern miracle'.

Outline of the plot:
Young Prince Valiant, son of the exiled King of Scandia, journeys to Camelot to become a knight at King Arthur's Round Table. He hopes to help his father reclaim his throne from the pagan usurper Sligon and restore the Christian faith to their homeland. On his journey he stumbles on the mysterious Black Knight plotting with the Viking pretender to overthrow Arthur. Barely escaping with his life, Valiant encounters Sir Gawaine, a friend of his father's who tutors the young Viking in the skills needed to be a knight. Valiant and Gawaine's pupil/mentor relationship is complicated by their romantic involvement with Princess Aleta and her sister Ilene, daughters of a British nobleman. If Valiant is to restore his father's throne and prevent the coup d'etat against Arthur, he must uncover the true identity of the Black Knight.
The Trailer:

2 unique Underground Tours to discover the world of the Victorian Slate Miner. Meet Sion Dolgarregddu your ghostly guide via the sound and light sequences of the Deep Mine, or ride into a network of spectacular man-made cathedral high chambers on the Miners Tramway. Plenty of surface facilities to enjoy. Shop, Cafe, Slate Workshop (with slate splitting demonstrations) and the Victorian Village (April-September) with its traditional tavern and old fashioned sweet-shop. Easy Access and ample free car parking.